Atanas Skatov – What happened on K2?

What we were hearing over the radio transmissions on K2 the night of February 4th was alarming. 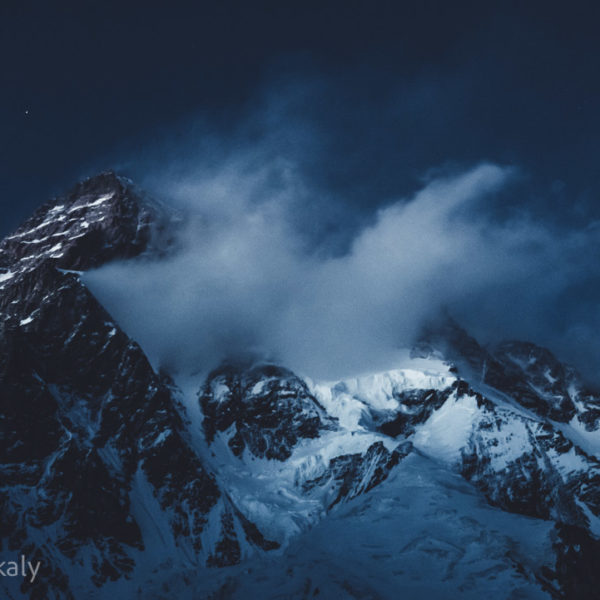 “That guy is going to kill himself”.  Said one climber of another who was determined to attempt the summit.

There were over 25 people at high camp 3 on the night of February 4th. Climbers were forced to pile into tents like sardines in a can and we were supposed to be there with them, camped out in our own personal tent that we were carrying at the time. As fate would have it, there was a serious oxygen mismanagement problem and the oxygen we purchased was not where it was supposed to be. There was confusion about a simple transaction we made. We purchased 6 bottles of oxygen that were all (6) supposed to be in one place. They weren’t where they were supposed to be. Given that we had arrived late to K2 and were on a rapid acclimatization plan 100% reliant on supplemental oxygen, we knew were dead without it if we were to continue higher up to proper camp 3. As a result, we abandoned our climb and film production because of this logistical error. A mistake not of our making that may have saved our lives.

We descended to Japanese Camp 3 and pitched a tent for the night in the brutal -35c temperatures. Our stoves barely functioned to melt ice and our only salvation was the warmth produced by 3 men huddled together, sheltered only from the elements by nylon fabric. This was Disneyland in comparison to what was unfolding higher up.

“I can’t feel my toes up here, I haven’t changed my clothes and I’m freezing”. One person said over the radio.

“Why the f**k aren’t there more tents up here?” Shouted another climber over the radio.

We were upset about our oxygen, but experienced and level headed enough to know that nothing could be done. Our expedition was over. This was now about survival. We had positioned ourselves in just 2.5 weeks to attempt to follow our teammates/film subjects Ali Sadpara, his son Sajid and John Snorri on their summit attempt of K2. It was an ambitious plan given they’d been on the mountain since December 5th and were very well acclimatized, but we were there, in position, with 15 years of extreme high altitude experience, prepared and ready to film as high as we could – ready to turn around at any moment.

By 11pm, we turned off the radio to preserve the battery and submitted to the unforgiving winter night and accepted that we would not be able to know the outcome of our friends’ expedition until the next day. We knew they were self sufficient, we knew they were the strongest and most qualified team on the mountain and entrusted the outcome to their vast experience, will and determination.

The next morning, we packed up our supplies and began our descent around 10am. 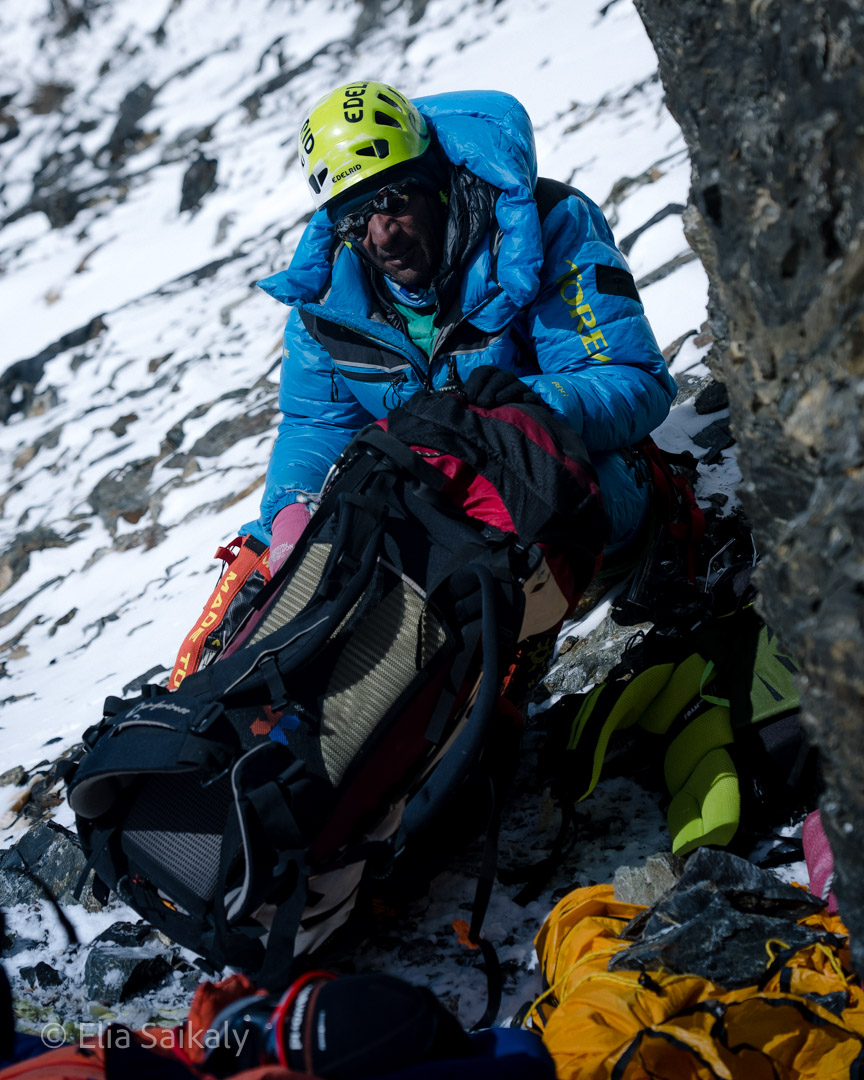 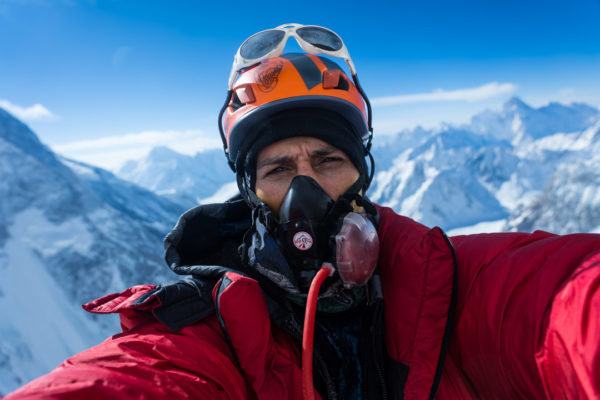 I had already been hit square on top of the the head by a kamikaze rock that could have killed me and was apprehensive every step of the way down. That rock left a hole in my helmet so I was incredibly cautious.

It’s difficult to know which rope to choose when descending K2 as there are so many old ropes. You need to be conscious and comfortable with the fact that should you make the wrong decision and the rope not hold your weight you will end up dead. It was a careful and calculated, triple safety line descent for me. When there was a doubt about the line, I’d clip into multiple ropes with one of my safety lines and rely on the rope we believed was the new one. I have to thank my friend and climbing partner Pasang Kaji Sherpa for helping me validate the integrity of each rope.

Part-way down the black pyramid, while rappelling vertically and entrusting my life into the right safety line, a body flew directly over my head out of nowhere. There was no warning. There were no cries. There was no sound. Only the terrible sight of a human being enveloped in a bright red down suit fly right over my head. I yelled in horror.

It was Atanas Skatov. He flew just inches by Pasang Kaji’s head as he was descending and right over mine.

I watched for 5-10 seconds as he tumbled and flipped upside-down multiple times, bouncing off the hard icy slopes of K2. My immediate thought was that his girlfriend Sheny was at basecamp, accompanying Atanas on his journey up the world’s 2nd tallest peak, and would be shattered with this news – as would so many others. What happened to to Atanas was every climbers’ worst nightmare.

At some point, Atanas’ body was ejected from his downsuit. He slid down the mountain to the base of K2 at ABC and his downsuit remained on the hill, wedged between the snow somewhere between Japanese camp 3 and camp 1. 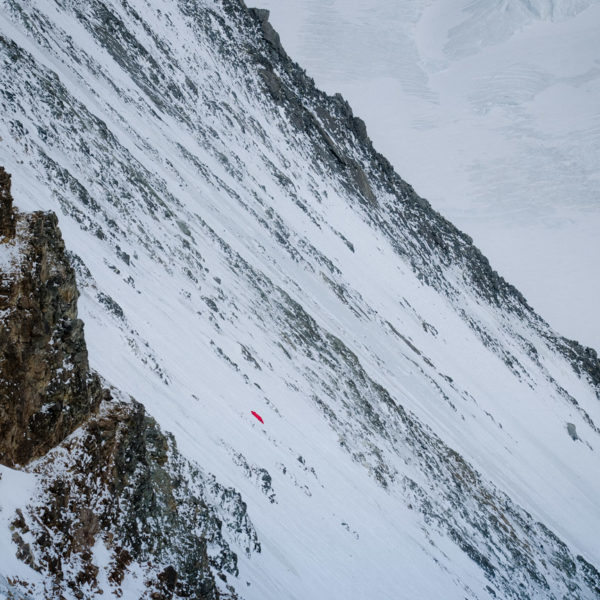 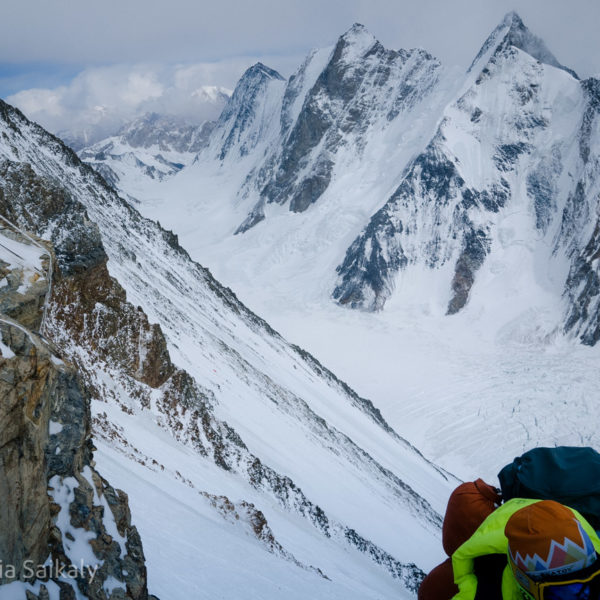 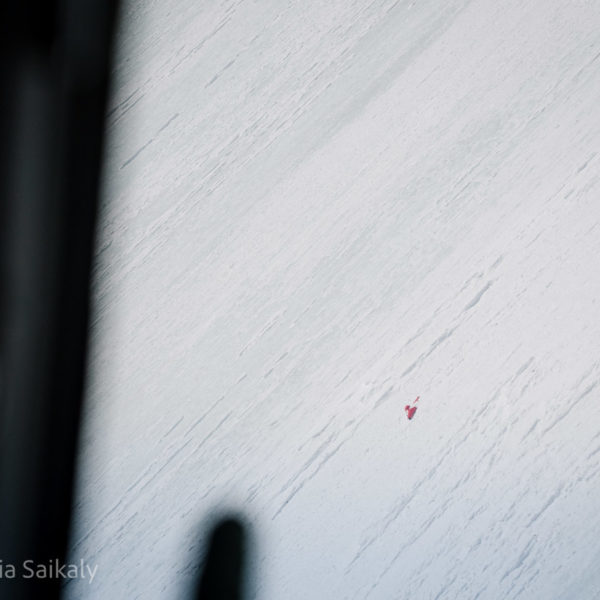 Lakpa Dendi, Atanas’ climbing partner and Sherpa guide was in quiet (controlled) distress. We were the first ones to see him after the accident. Lakpa showed us the video he shot just moments before Atanas fell. Atanas looked solid in the video. He had just clipped into a safety line and used his ATC to descend the fixed ropes. There was nothing out of the ordinary in the video. 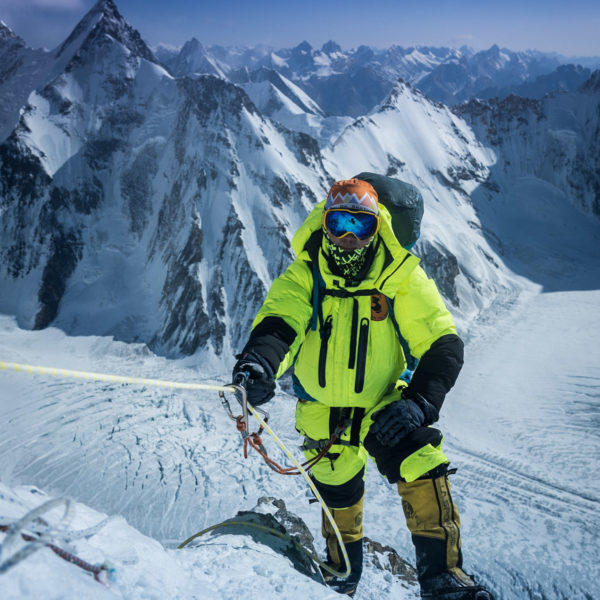 I was on a previous expedition with Lakpa and he’s one of the kindest and most competent climbers out there. I knew he was suffering from the loss of his friend and client. I felt terrible for him, nothing could be worse.

‘One moment Atanas was there and the next moment, he was gone’.  Said Lakpa.

It’s impossible to explain exactly what happened as no one witnessed the series of moves that Atanas made before he fell, but it is speculated that an error was made while switching lines. The moment you unclip your safety and entrust all of your weight (and life) to the safety line with your rappel device, you’re relying on the fact that you haven’t made an error, because you will die if you have. K2 is steep and relentless. If you fall , you will likely not stop until you hit the bottom of the mountain. I experienced this moment of loading my figure 8 rappel device with all of my weight many times. I constantly triple checked in with myself to ensure I did not make any mistakes. Atanas may very well have have made a mistake, but no one will ever know because no one saw exactly what happened.

I didn’t know Atanas, but I met him a few times at basecamp and crossed paths with him at camp 2. The last time I saw him alive, he waved at me through the tent vestibule and said “Hi Elia’.

I took a special interest in Atanas because of fellow Bulgarian climber Ivan Tomov who lost his life on Lhotse in 2019. I made two trips to Bulgaria to meet with Ivan’s parents, to tell Ivan’s story and to help them honour their son’s life. Ironically, Ali Sadpara was the key witness to Ivan’s last moments on Lhotse as he spent a night in a tent with Ivan before he died. I interviewed Ali about this right before his disappearance on K2. Sadly, another Bulgarian has lost his life and the degree of separation for me is far too close to home.

In my humble opinion, from all I saw and understood from Lakpa, Atanas’ accident was in fact, an accident. He likely made an error while changing ropes and sadly, it cost him his life.

“Sheny (Atanas’ girlfriend) asked me about rope. I told her rope is not cut, I come down same rope and he made a mistakes when he changes the safety”. Lakpa Dendi.

Elia Saikaly
I’m drawn to the natural beauty of our planet and the stories of the beautiful people who inhabit it. My mission is to inspire others to live their fullest and most meaningful life. Join me on my adventures and be inspired to live your own.
Previous Post
Your Everest photography and timelapse assignment
Next Post
Protected: Everest – How to deal with the unexpected 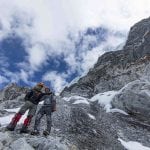 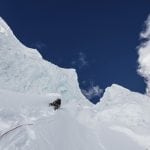 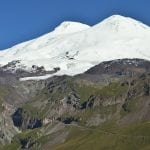 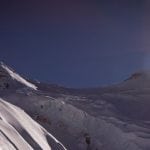 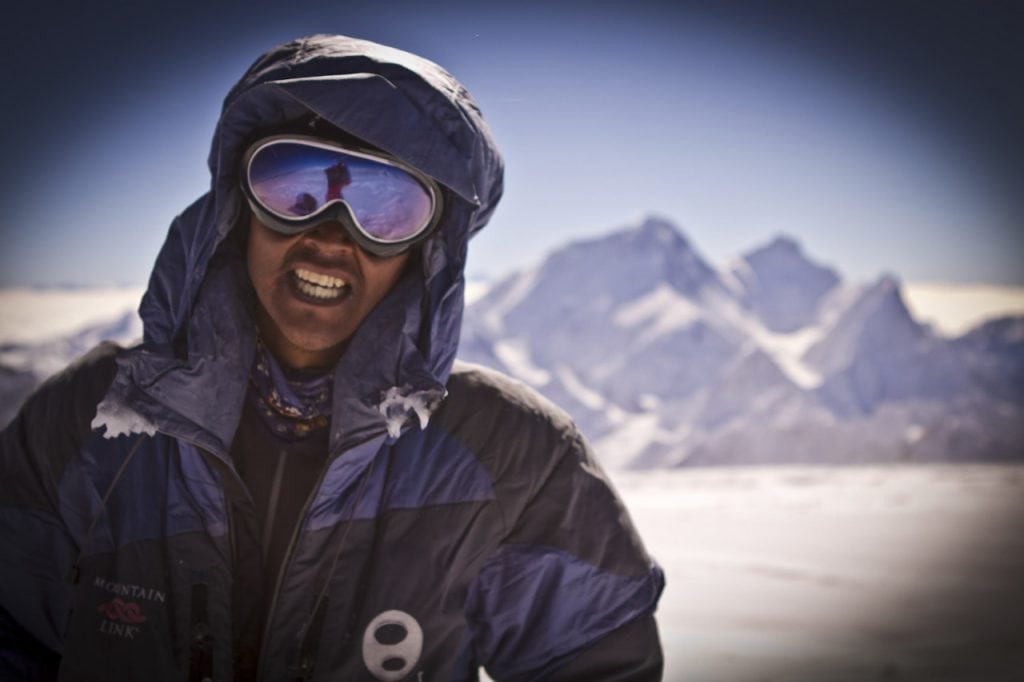 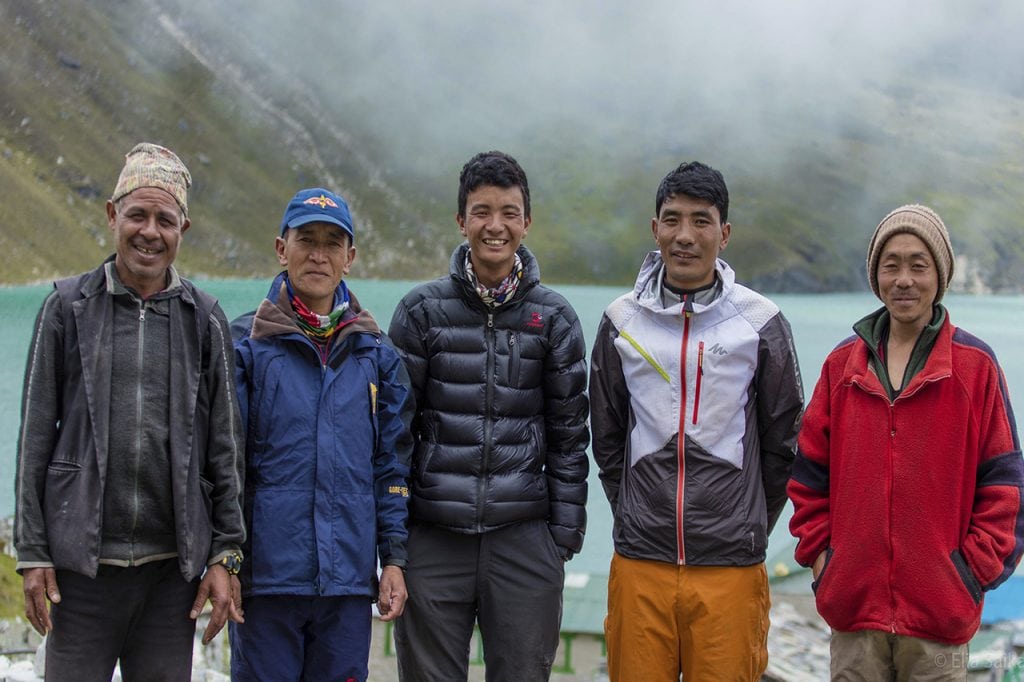 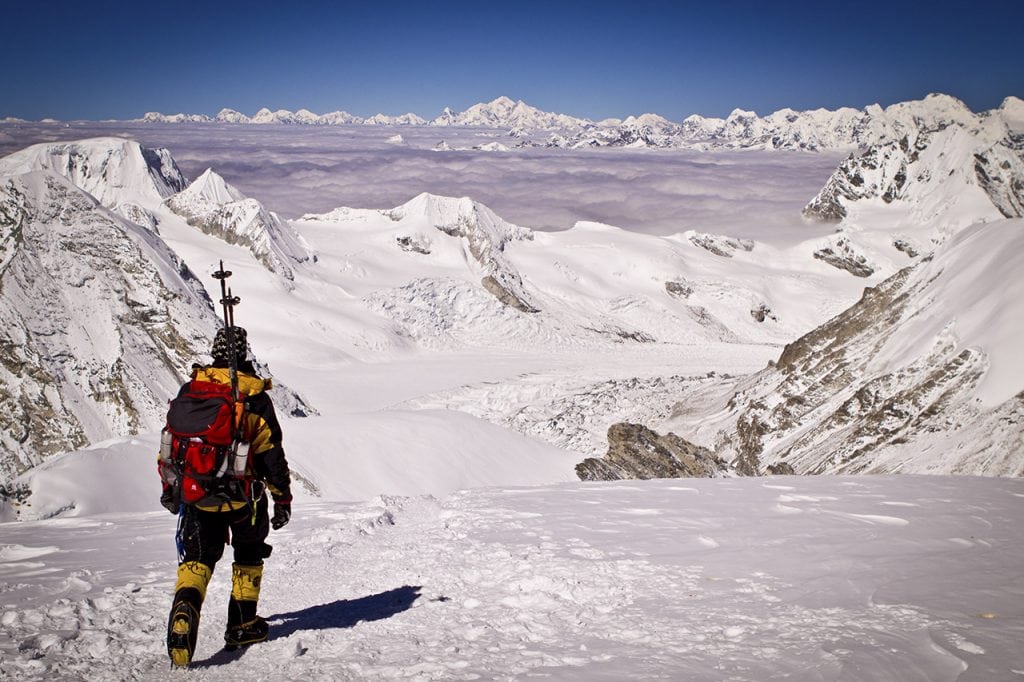