Home and Really Far Away, produced by SportsNet, shot by Elia Saikaly, was nominated for Best Sports Program by the 2015 Canadian Screen Awards.

This broadcast special follows the Whale Cove Whalers, a hockey team from Nunavut, as they make their journey from northern Canada to the bright lights of Toronto. It was produced by Rogers Sportsnet, and Elia Saikaly acted as director of photography. The Canadian Screen Awards celebrate Canadian productions and talent who excel in front of the camera and behind the scenes in Canadian film, television and digital media.

Elia Saikaly
I’m drawn to the natural beauty of our planet and the stories of the beautiful people who inhabit it. My mission is to inspire others to live their fullest and most meaningful life. Join me on my adventures and be inspired to live your own.
Previous Post
On the Top – CINE Golden Eagle Award
Next Post
Rebuilding Nepal – Charity Campaign 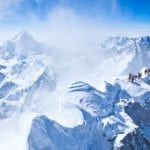