Mt. Everest.  Step by step, raw and unfiltered. Experience the final push to the top of the world.

My goal was to create a video that would transport viewers to the summit of Mt. Everest. No music. No sound effects. No slow motion. No extreme wide angle helmet-cam footage. Just the raw sound of the environment, the flow of oxygen being inhaled through climbers’ masks and the deep struggle and gasps for air as each person endures, suffers and ultimately prevails.

Climbing into the death zone at the cruising altitude of a 747 jetliner is a serious undertaking. They call it the ‘death zone’ because your body literally starts to die. You are deteriorating faster than you can recover. You are on the edge of space and the margin of safety is razor thin. You’re racing against the clock to descend before the weather turns and you’ve got approximately one third of the atmospheric pressure at 29, 000ft above sea level. Everything as a result is excruciatingly painful, difficult and slow. For most climbers, this is the most physically and mentally demanding moment of their lives.

Some are guided, some choose to climb without oxygen, others choose more complex direct routes up the mountain. Personally, I fill up on the additional challenge of running around the mountain with cameras, chasing climbers, dealing with batteries and capturing the struggle authentically while ensuring I do not interrupt the process or put myself or anyone else at risk. As a filmmaker I chase stories not summits and in this case we were telling the story of a team of Arabs, friends of mine, including the the first Saudi Arabian woman Raha Moharrak, Palestinian businessman Raed Zidan and Qatari explorer, Mohammed Althani. Being of Lebanese origins, I believed strongly in each of their potential to inspire a new generation of adventurers and committed to supporting their dream and giving it my all to document their journey.

My goal on the final night was to shoot as much of the summit route as possible, position myself on top of the famous Hillary Step and record the climbers scaling the iconic cliff on top of the world.

An excerpt from my summit blog:

“The climb from the deceased climber at 8500m to the south summit is the most difficult section for me. I feel dead inside, lifeless from having witnessed such a tragedy. I allow myself to live emotionally in the moment for about 30 minutes before cutting it all off and reminding myself that I can end up like him if I don’t smarten up. So I continue climbing, struggling to pull my weight up the steep, jagged rocks beneath the south summit.

I can feel my body slowly shutting down. The weight of my tripod, two cameras, all of my batteries, including my oxygen, has taken its toll on me. I have been revving at 120% for the past 10 hours and I’m almost out of gas. I am the first to arrive to the south summit and recognize that we have the mountain to ourselves. I mentally devour the sheer beauty of the wind howling and racing across the summit. The tallest peak on Earth is but a few metres away. I am completely alone making my way toward the Hillary Step. I haul myself up with a 2400m drop beneath me, camera around my neck, oxygen tank flowing at four litres a minute and I wait for the team to arrive. So often dozens freeze and turn back and here I am just hanging out on top of the step waiting to capture this unique shot.”

It was exhilarating and surreal to film the team members ascending the Hillary Step with my Canon 5D in hand. I planned this sequence for months and there I was, with zero margin of error, just a few meters shy of the top of the world. A single mistake would cost me my life. Once the team passed me, I filmed them straddling the saddle rock and realized I needed to pass over 10 climbers on the summit ridge in order to position myself on top of the world to film their arrival. 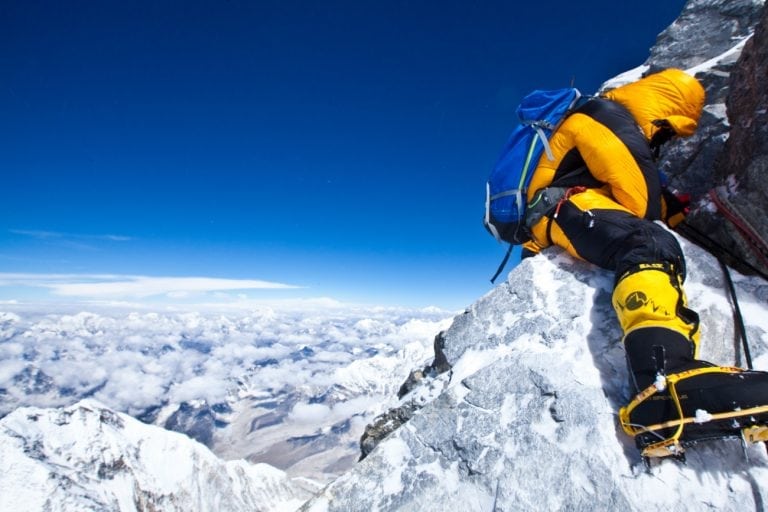 I decided to leave in the gasps for breath in the final video on the summit for effect to help the audience understand just how much work this was and how much I suffered during the process. 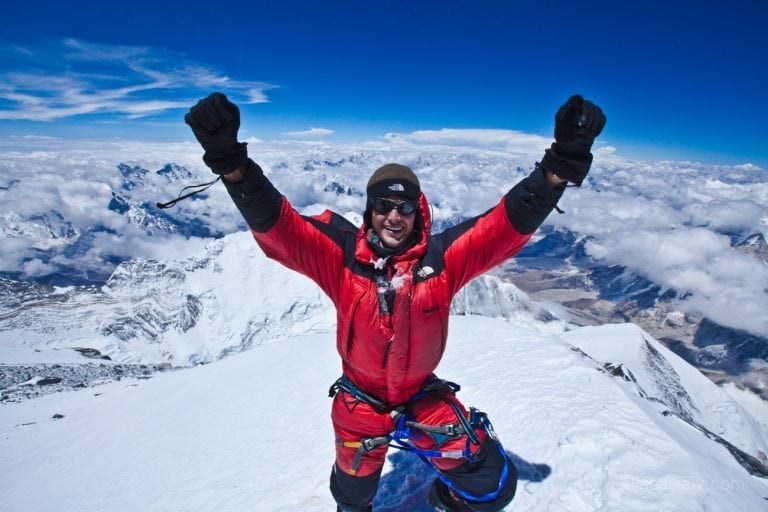 As soon as we descended from the South Summit we found ourselves in a full blown rescue operation. One of our team members who was struggling on the Hillary Step ran out of gas and it took the entire team to rescue him. We were in a white out by the time we reached the Balcony and the descent was painful and arduous. That climber is lucky to be alive. I was suffering immensely at the time, exhausted from the Herculean effort it took to film for 60 days, but decided not to breathe a word of it to anyone. The only person who knew how wasted I was by that point was Phurba, one of the two extra climbing Sherpas I hired to help me. That man sat next to me and watched me like a hawk. He stood by my side with my extra oxygen cylinder and barely blinked an eye until we replaced it. That’s the Sherpa for you. Incredibly committed and compassionate human beings.  I kept just enough energy to descend to camp 4 at 8000m.

As soon as I descended to camp 4, I collapsed into my tent and immediately fell asleep.

At 9pm, my tent mate, Raed, woke me up because of my breathing – or lack thereof.

“How long have I been out?”

I began devouring as much food, water and calories that I could get my hands on before surrendering to unconsciousness.

Without sounding too dramatic, I was truly grateful to wake up the next morning. I never push myself that hard in 8000m environments as it can be deadly, but decided to take the risk because of how much I believed in this team and this project. There was no way I was going to let anyone down. It was the most terrifying night of my life and I swore I’d never go to those extreme lengths again to tell the story and to do my job.

It’s important to note that none of this would have been possible without the support of my camera assistant and friend Pasang Kaji Sherpa, the guides Michael Horst, Verj Tejas and ALL of the Sherpas who make climbing Everest possible.

Filming in the death zone at 29, 000ft above sea level was incredibly challenging. I went beyond my limit to create these images and took very calculated risks with my life to bring this footage back. Whether you’re an Everest dreamer, aspiring mountaineer or just someone who is fascinated with the world’s tallest mountain, I hope my work gives you a glimpse of what it’s like to summit Mt. Everest.

May it inspire the wildest of dreams.

Elia Saikaly
I’m drawn to the natural beauty of our planet and the stories of the beautiful people who inhabit it. My mission is to inspire others to live their fullest and most meaningful life. Join me on my adventures and be inspired to live your own.
Previous Post
Everest – A time lapse film II: How I did it
Next Post
The Climb for Albinism – How it came to be 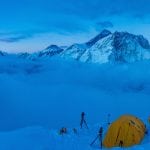 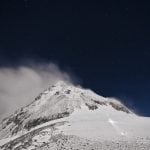 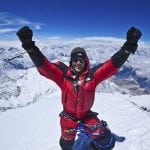 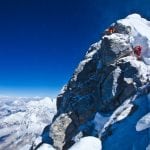 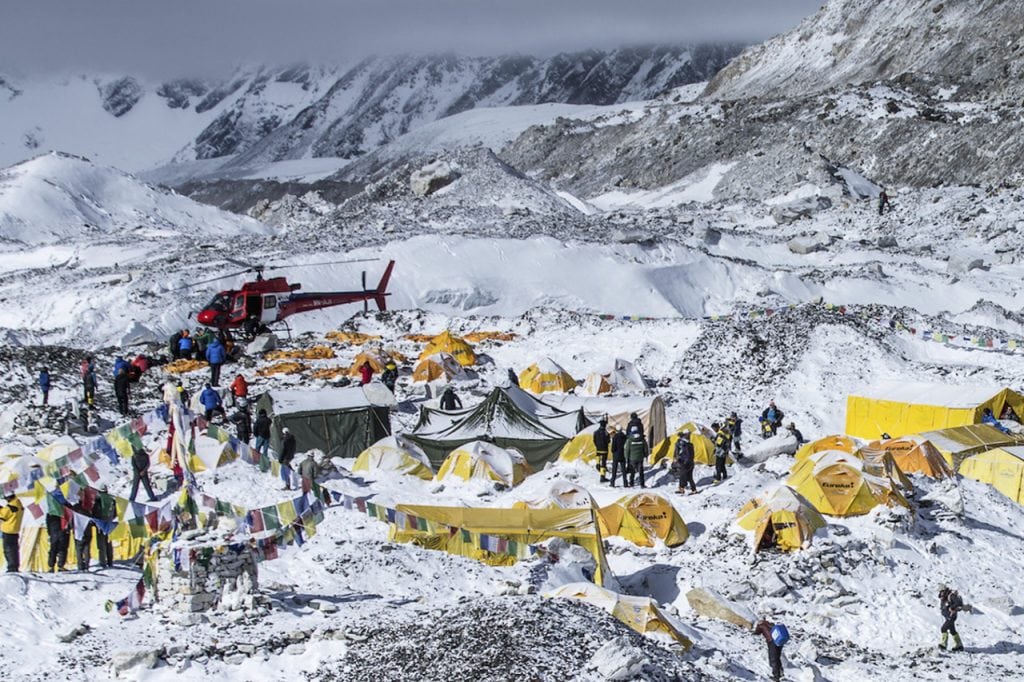 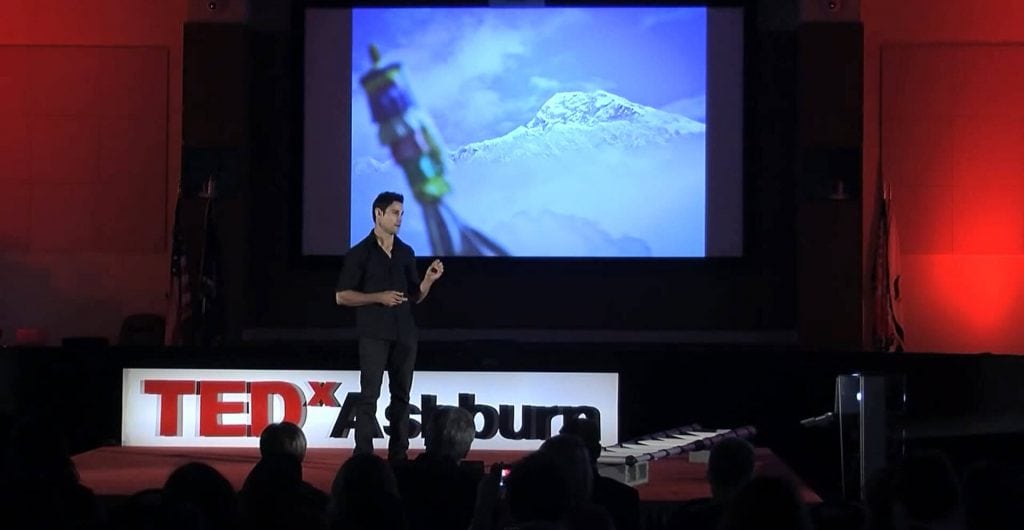